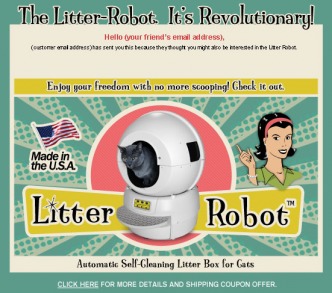 With seven litterboxes in my house, I realized scooping was taking longer and longer.  So, we got a Litter-Robot, and then a second one.  Each 'Robot can serve up to five cats, giving them clean litter every on demand (as often as every seven minutes!) and a level surface for digging.  We still keep a few regular litterboxes in case the 'Robots are occupied, but having these great automated litterboxes has cut down a lot on my effort in scooping.  Late at night I sometimes hear the Litter-Robot in the foster room scooping automatically, and I smile.
Other automatic litterboxes are just not strong enough or designed well enough to last in our busy cat cottage.  I often see rejected or broken Littermaid units being returned to PetSmart and other pet stores.  My first Litter-Robot has been in constant operation for almost two years, and is still going strong!  What's frugal about this, you might ask?  Well, I did order 'reconditioned' units, and used a 10% off coupon I got for referring Litter-Robot to friends and family.  And, I think our cat litter use has gone down with the efficient scooping of the automated system!  I think the Litter-Robot would be a great addition to cat shelters' 'community rooms.'  Volunteers would have to scoop less, and cats would be exposed less to 'poo' and its germs!  And, if more cat 'parents' would use Litter-Robot, their cats would be more likely to use the litterbox appropriately.  Since 'elimination outside the litterbox' is among the top ten reasons given for surrendering cats to shelters, this could reduce numbers of cats coming in to shelters.  It would be great to see a grant funded for a hundred 'Robots to be used by people who can't scoop cat litter:  pregnant women, people with bad backs and those with immune-related disorders like HIV/AIDS.  Our friends at P.A.W.S.--'Pets are Wonderful Support'--could use such a 'windfall of 'Robots!'

Here is a fun video showing a little Persian kitty, 'Luna', using her Litter-Robot.  There are many more videos on Youtube showing cats of all types and sizes using a 'Robot!
http://www.youtube.com/watch?v=w_r2pc_q9RE&feature=related